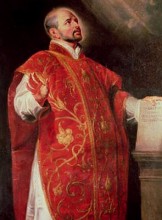 Saint Ignatius of Loyola, also known as Íñigo Oñaz López de Loyola, was of noble birth and was reared in the household of a prominent courtier. In 1517 he left his life at court to enter the army. During a convalescence (1521) from a serious wound, he was converted through reading a life of Jesus. He went to Montserrat, where he was confessed and absolved, and from there he went to Manresa. In 1523 he set out for the Holy Land. Prevented from entering Palestine, he returned with the decision to secure an education.

He studied at Barcelona (1524-26); at Alcalá (1526-27), where for a short time he was imprisoned by the Inquisition; at Salamanca (1527-28), where he again suffered brief imprisonment; and at Paris. St. Ignatius’s strength lay not in scholarship but in spiritual direction. The Inquisition again became suspicious, but he was cleared of any irregularities. He and six followers, among them St. Francis Xavier and Diego Lainez, together took vows of poverty and chastity. This group was the nucleus of the future Jesuits. They planned to go to the Holy Land and live in imitation of Christ, working to convert the Muslims, but the Turkish wars intervened, and they went to Rome instead. They were ordained (1537) and received by the pope (1538), who set them to work in Italy.

In 1539, Ignatius drew up a Formula for a new order and secured (1540) papal approval. It served as the basis for the later Constitutions, published at his death, by which Jesuits have been governed ever since. Ignatius was elected (1541) general of the order and remained its leader, with headquarters in Rome, until his death. Although the Jesuits became a major force in the Counter Reformation, the society was not founded particularly for that purpose. Ignatius’s great interests seem to have been the foreign missions and the education of youth. Many schools were opened in Europe during his lifetime, and missions were begun in Japan, India, and Brazil.

He was dominated all his life by a desire to imitate Christ. His Spiritual Exercises, written over a number of years, are a series of reflections, examinations of conscience, and prayers, grouped according to a traditional set of four steps leading to mystical union with God. The spirituality identified with St. Ignatius is characterized by emphasis on human initiative. His little book is a classic of Christian mysticism and is much used by devout Catholics. His concept of the “soldier of Christ” has often been understood too militaristically: Ignatius used the image in obvious imitation of St. Paul (Eph. 6.10-17). He is buried in the Gesù at Rome. He was canonized in 1622.